TOKYO/SINGAPORE (Reuters) – The dollar was on the back foot on Monday as growing expectations of U.S. interest rate cuts to cushion the impact of the coronavirus stemmed some safety flows into the greenback.

After U.S. shares were routed in recent days, Federal Reserve Chairman Jerome Powell said on Friday the central bank will “act as appropriate” to support the economy.

Investors took his comments as a hint the Fed will deliver a cut when it meets from March 17-18, and as an encouragement to central banks around the world to follow suit.

“This statement is likely to be seen as a ‘call to action’ for other central banks around the world,” Westpac chief economist Bill Evans said.

The dollar ceded ground to the Aussie, euro, pound and yuan.

Yet the expectations around the Fed, with futures now implying a 50 basis point cut 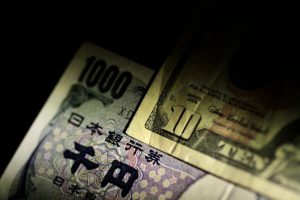 , also underscore the scale of the virus’ spread and how deeply markets are on edge – keeping a lid on moves.

“It’s a bit of a dilemma today between celebrating Fed cut prematurely and really selling off risk,” said Vishnu Varathan, head of economics at Mizuho Bank in Singapore, especially since it will likely take more than cuts to offset the virus’ damage.

“What’s most important, to quote Jerry Maguire, is ‘show me the money’. It’s not so much about the interest rate – a 25 basis point interest rate cut is not going to make a business that cannot find cashflow feel better,” he said.

There is also increasing chatter of an unscheduled move, with a U.S. bank lobby economist saying a coordinated cut by top central banks could happen as early as Wednesday.

Dragging sentiment in the other direction were more reports of the virus’ relentless spread and economic damage.

Health officials in Washington state confirmed the second U.S. death from the virus, saying late Sunday that a nursing home resident had died.

Still, helped by the dollar’s softness and signs of stabilisation in the epidemic in China, the yuan jumped to a near three-week high of 6.9703 per dollar.

The next closely-watched data points are euro zone manufacturing surveys due at 0900 GMT and the U.S. ISM survey due at 1500 GMT.